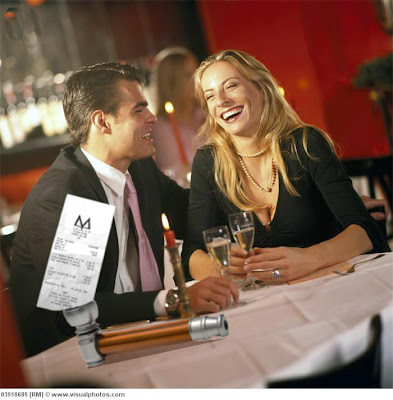 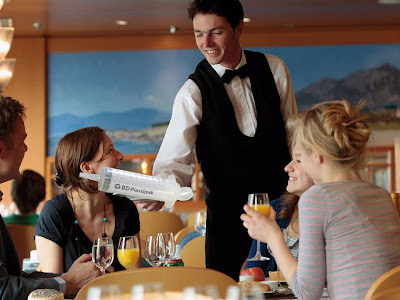 Ottawa - A new gastrobistro in the heart of the gentrified Hintonburg neighbourhood is giving customers their receipt in a whimsical manner using old crackpipes and used syringes. With most trendy restaurants trying to out-do one another with quirky ways of handing a customer their receipt, "CRAKHAUS" in Hintonburg has gone one step further with the use of discarded syringes and crackpipes found in a trash can behind the restaurant during renovations.
Crakhaus owner Hume Plantry has overseen each detail of his new restaurant and wanted to offer his customers an offbeat dining experience that would challenge the conventional methods of giving out receipts to clients. "The whole CD case, old book thing has been done already, so I wanted to take the receipt transfer a whole new dimension by giving it to the customer in a genuine used crackpipe or syringe that really honours the history of the restaurant building." explained Plantry who opened his restaurant last month.
Common with many new, hip, trendy restaurants, receipts are usually handed to a customer in an eccentric holder of some sort, but with competition increasingly becoming tougher, Plantry hopes to have an edge over his competitors by offering the syringe/crackpipe option. "We washed them first, but you really can get the feel for the old neighbourhood when we bring you your bill." Plantry remarked. Most customers were impressed with the whimsical receipt delivery and applauded Crakhaus' use of the old backyard items. "It's really neat," mentioned Crakhaus customer Tanya Hommel, 26, "it's exactly how I want my $200 bill for two entrees and a bottle of wine to arrive."
Some customers have complained about the receipt delivery items, especially when Plantry first decided to try giving customers a receipt in a used condom from the adjacent alley. "I thought it was especially whimsical to give clients their meal receipt in a used condom to really make them feel part of the neighbourhood, but the health Unit reminded me it was unsanitary." plus I had a lot of customer complaints." Plantry remarked.
Crakhaus hopes to continue being a leader in receipt quirkery, but just down the street at the new restaurant "Klasp", rumour has it they will be giving customers their receipt in the mouth of a live asp. "Hintonburg is on the cutting edge of culinary trends and they can change quickly." stated Plantry before washing out another syringe.
Posted by Tommy Talker at 6:41 PM

Tommy Talker
The O-Dot is brought to you by Tommy Talker, a veteran news anchor that lurks in the shadows of your neighbourhood...Mr. Talker can be reached by email: tommytalker@gmail.com